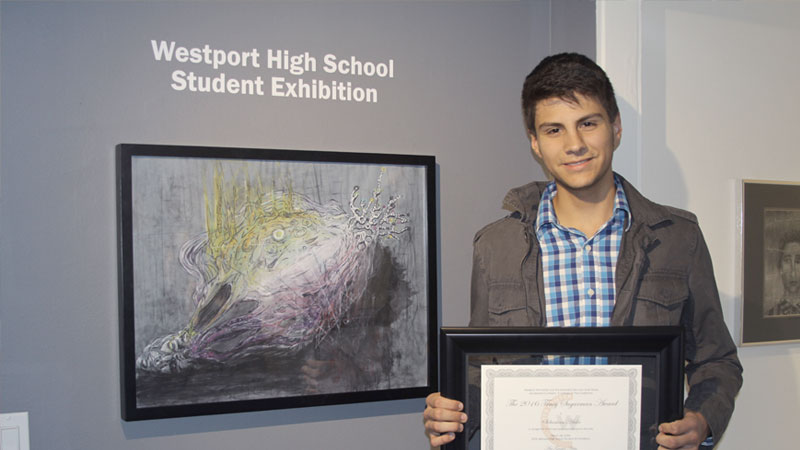 As part of the competition, Staples High School eleventh-grade student Sebastian Avila was chosen as the recipient of the 2016 Tracy Sugarman Award for his work “Dream On,” a charcoal and wax pastel drawing.

The competition was generously sponsored by The Honorable Alan and Janet Nevas in memory of Tracy Sugarman. Sugarman was a 62-year Westport resident who was an illustrator, writer, civil rights activist and WWII veteran. He is best known for his painting and illustrations recording American history from D-Day to the space shuttle. Mr. Sugarman passed away in January 2013 at the age of 91.

The competition was open to all students who reside and/or attend high school in Westport, providing an opportunity for students to share their creativity and talent with the community in a gallery setting.

The works of art were juried by Ann Chernow, a Westport artist who is known for her portrait-style illustrations that evoke the images of female cinematic figures of the 1930s and 1940s. Her exhibition, NOIR, was simultaneously on display at the Westport Arts Center.

Of the student entries, Chernow stated, “Congratulations to all for creating interesting work. I applaud your attention to making art, and urge you to continue.”