In its fourth year, the exhibition (on view March 23 – June 2, 2018) was juried by esteemed art historian Elizabeth Gorayeb, Executive Director of the world-renowned Wildenstein Plattner Institute. She also served as the curator for the Arts Center’s Spring Exhibition, Handmade: Women Reshaping Contemporary Art.

Staples High School senior Lilianna Giaume of Westport, CT was chosen as the recipient of the Tracy Sugarman Award for her oil painting, The Caw of Mutiny, an interpretation of Edgar Allan Poe’s poem The Raven. The Tracy Sugarman Award was given to the Juror’s Choice for best submission among Westport students.

Staples High School sophomore Maise Prince of Westport, CT won the People’s Choice award for her charcoal on paper work, Fro, featuring a student in her art class. The public was invited to vote for their favorite work between March 23 and April 19.

A third award, the Sontag Advisory “Best In Show” Award, was given to Lily Fine of Stamford.  The award included a $500 prize.

Of the High School Student Art Exhibition, Gorayeb stated, “Over all, the works submitted for consideration evidence a sensitivity and patience that is not always attributed to this fast-paced generation. The fact that these students chose to represent the world around them, in some cases with painstaking detail and careful observation, speaks to the craving that we all have during the digital age to connect.”

The high school Call For Entries was open to students throughout Fairfield County.

Westport residents and/or students that attend a Westport High School were eligible for the Tracy Sugarman Award. 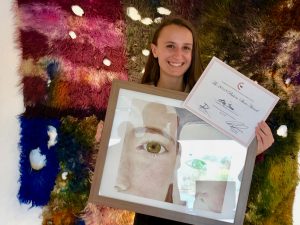