This exhibition is now closed.  Our gallery will reopen with our Fall Exhibition, World Peace, on October 8, 2020.

MoCA Westport is pleased to present an exhibition of works by Helmut Lang, curated by Todd von Ammon, on view to the public through September 12, 2020. The exhibition spans both galleries of the museum and consists of two separate projects, demonstrating the continued evolution of Lang’s contributions to culture and art.

The first gallery hosts a self-contained exhibition of all-white wall-reliefs and sculptures. These wall-mounted planes, pillars and spikes are embedded within a practice defined by ruin, accretion and preservation of materials which typically takes on the charred and blackened complexions of decay. The planes—whose pale tones allude to bones and ashes—hang abutted to one another like altarpiece panels, and the mounds and spikes resemble an abstracted reliquary. This mise-en-scene is a striking corollary to the brunt of Lang’s exhibitions to date.

The second gallery contains a site-specific configuration of sixty-three of Lang’s celebrated “pillar” sculptures, which share a common medium: a multitude of shredded and crushed objects and materials suspended in pigmented resin. This loamy, fibrous sculptural composite material consists of Lang’s destroyed design archive. Leaving a previous career behind, the artist staged an intentional cataclysm and has been making new work from its wreckage ever since. The lean, crusted pillars arranged in a loose grid stand freely in seeming precarity, with small gaps between one another through which the viewer may travel. This second installation, while aggressively economical in its content, provides an immersion into Lang’s ocean of material language.

Lang’s work is a disavowal of the illusion of time as periodic, tidy and rational. The sculptures on view portray history as entropic and digestive, a suggestion that the truest character of forms is their tendency to dissolve and transform through time.

We have released a new short film that showcases our current exhibition, Helmut Lang: 41.1595° N, 73.3882° W, curated by Todd von Ammon. The film presents a first-person experience of walking through the exhibition, and provides background on Lang’s inspiration for the works.

“It suggests that perhaps the greatest reward of lived time is its potential to be forged into something new.” 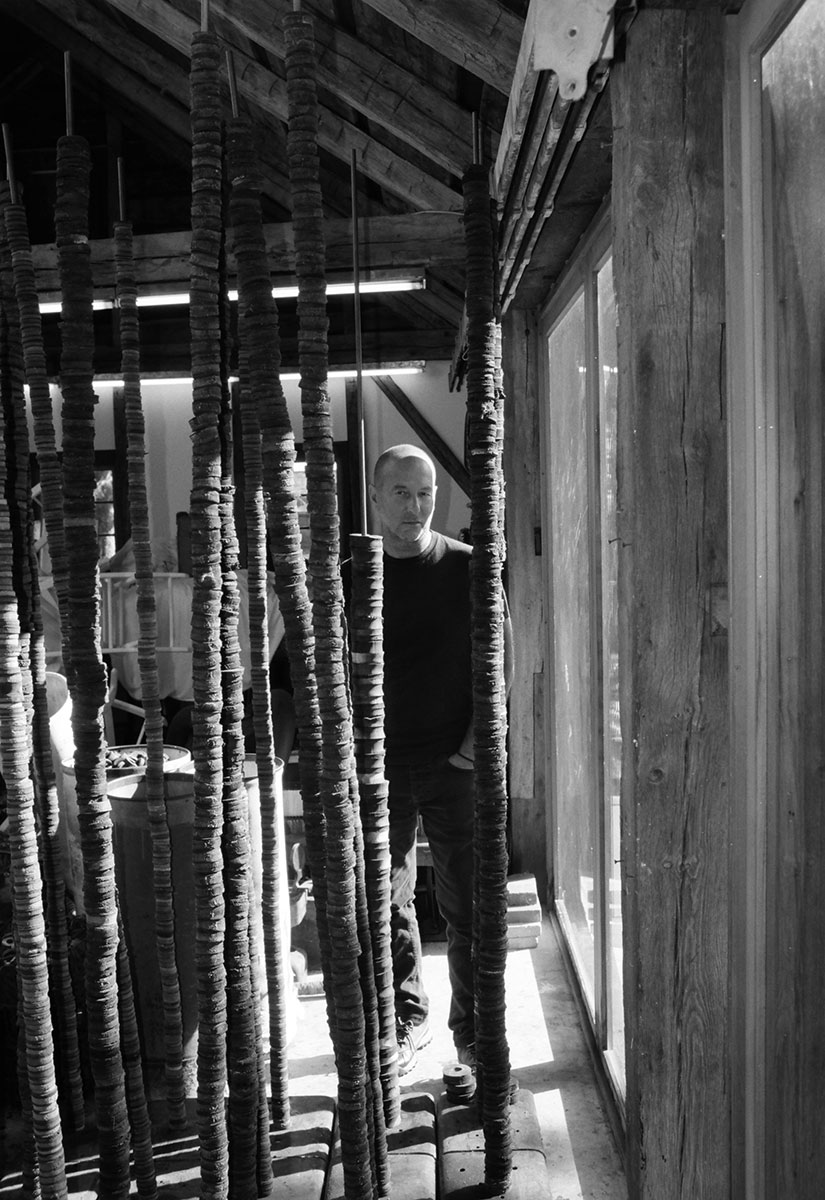 One needn’t be a dedicated follower of fashion to have memories of Lang, one of the most forward-thinking designers to ever work in the industry. Lang became a household name in the 1990s and was known for his minimal yet romantic aesthetic and  collaborations with Jenny Holzer, Louise Bourgeois and the estate of Robert Mapplethorpe. Lang said goodbye to all that in 2005. And if there was any doubt that he meant it, in 2010, after a fire destroyed most of his archive, he completed the job, using the remains as material for his mostly abstract art.

I abhor creativity. The common theme throughout all of my work as a gallerist and curator is an attraction to artists whose common objective is the denaturing, pulverization and dissection of manifest reality to uncover that which already exists but had been latent and invisible. In mathematical terms, this tendency of artmaking would resemble the asymptote — the ever-diminishing slope towards zero. A successful art practice, to me, does not involve furnishing reality with new forms of ornament, but is instead a processing (and making strange) of that which already exists. This generally involves the artist’s reckoning with her or his own memory and experience, and the myriad traumatic spaces therein.

If memory is the haven of consciousness, it stands to reason that we attempt to keep this space as orderly as possible — or, at least, convince ourselves that this is so. Mnemonists use a tactic called a memory palace to tame the wilds of lived experience — using a familiar place (a childhood home, for example), the mnemonist will spatialize each memory so that it can be easily summoned. Each sane individual tends to her or his own memory palace, wherein the belief that reality and lived experience are concepts that one can tame into some familiar edifice. When there is a disruption in the flow of mental continuity — whether that be from a lapse in consciousness or a cataclysmic event — we catch a glimpse of the void — that zero state that the asymptote curve always approaches but never quite meets.

The work on view in Westport is not only a voiding of time but also of space. The works on view are the result of a cataclysm: a small fire in Lang’s studio destroyed part of the artist’s archive. This accidental event inspired a call of the void, and inspired Lang to proceed to destroy the rest of the archive using an industrial shredder. L’appel du vide is the temptation (or fantasy) that many sane people get when peering over the edge of a skyscraper: it is the urge to climb over the railing and dive into the void, or enter a horror reality.

To love the past, to extol the past, to yearn
in some way to inhabit the past is surely to
misread the past, purposefully or otherwise;
above all, it is to select from the past only
those aspects which accommodate a self-
protective and nourishing fantasy. What is
“past” tempts us to reconstruct a world rather
like a walled city, finite and contained and in
the most literal sense predictable.

Lang’s forest of narrow pillars has no allusive title — simply the number of objects in the room, 63. Observed closely, the viewer can identify morsels of manifest reality — a frayed piece of textile, the glint of a metallic sequin — embedded in a delirious muck of resin.  Each fragment not only alludes to a time in Lang’s life but also to a space which the artist once inhabited. The materials, however, have been rendered so granular so as to completely untether them from memory. The pillars have been installed so as to allow the viewer to become subsumed by not only the presence of the sculpture but by the non-presence of materials embedded therein. 63 is installed as a uniform, incomplete grid so as to remove any reference to naturalistic space. It exists as a non-space made up of linear vectors with no prescribed order: a palace of schizophrenia.

As the viewer recedes, 63 becomes an amalgamation of lines which terminate at various heights. At this point, the viewer is aware that each of these lines is composed of Lang’s razed memory palace. Manifest objects possess bodies: for an object or space to be recognizable, it must have certain hierarchies for the mind to decode. Even an amorphous stone formation is still manifest as stone. Lang’s destroyed archive can only be described as such, and is therefore impossible to decode satisfactorily with language. 63 thus becomes a field of void-vectors which cancel one another out as the viewer navigates the work’s perimeter.

Lang’s art practice is concerned with making voids, but it is also a general rejection of traditional formalism and composition. In the exhibition’s other gallery are three bisected mounds made of destroyed archive and resin. Their hulking, bowed forms are borne of inevitability, like stalagmites or guano piles. Lang’s strategy in making sculpture is to take the path of least articulation: one could imagine that these mounds emerged as by-products of another sculpture’s formulation. The central, lengthwise incision does not describe an inner reason, but merely proves that they are made from the void and hollow at the core. A long row of flat works suggest the reassuring presence of paintings; they are, however, borne of the protective covering used in the studio during the making of the exhibition’s sculptures. Thus Lang proposes the exhibition as interstitial, residing in the space where his materials move from one state into another. Far from furnishing the world with new embellishment, the artwork seeks to prove that the only true determinism of matter is to experience itself in new forms.

The disjointment of time and space has the potential to create a horror reality: Lang’s sculptures are a haunting of the present with the disorienting fragments of past lived experience. Memory can be a tyrant, forcing us to assemble a grand narrative based on the spaces we’ve occupied and the objects we’ve encountered — to construct a walled city with perceived limits and dimensions. Lang’s artwork proposes time as digestive, untidy and unbiased. It suggests that perhaps the greatest reward of lived time is its potential to be forged into something new, and that liberation from the memory palace is the one truly sublime state.

Born in Vienna 1956, Helmut Lang lives and works in New York and on Long Island. In 2004, Lang walked away from a groundbreaking career in fashion for good to pursue his original calling as an artist. Hailed for the rigorous and direct ethos of his forms and choice of materials, he has been met with similar acclaim for his art.

Since 2005, Lang has permanently turned away from creations in direct context with the human body, and has since turned his focus exclusively to two and three-dimensional artworks which subtly allude to notions of the figure using different mediums such as sculpture, wall pieces, installations and videos, predominantly built from found and readily available materials.

In his former occupation, he left an everlasting imprint on contemporary culture and how it is communicated by redefining fashion codes and the modus operandi. His undeniable influence continues to reverberate to the present day.

He simultaneously produced his own artwork while collaborating and exhibiting with different artists, most notably with Louise Bourgeois and Jenny Holzer, which has broken collateral ground in the recent resurgence of collaborations between fashion and art.

Armstrong, Annie. ‘There Is No Plan B’: Helmut Lang on Turning His Fashion Archive into Sculpture. ARTnews, September 19, 2019.

Gavin, Francesca. A Rare Interview with Helmut Lang. AnOther, September 20, 2019.