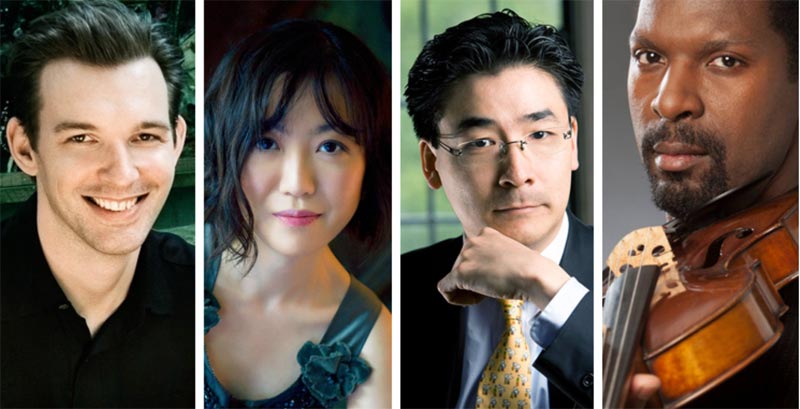 This performance will take place INDOORS. Giving performances that are “lithe, persuasive” (The New York Times), the Horszowski Trio has quickly become a vital force in the international chamber music world. The Trio will perform with the accomplished violinist Azikiwe for this special performance.

Giving performances that are “lithe, persuasive” (The New York Times), “eloquent and enthralling” (The Boston Globe), and described as “the most compelling American group to come on the scene” (The New Yorker), the Horszowski Trio has quickly become a vital force in the international chamber music world. Since their debut performance in New York City in 2011, they have toured extensively throughout North America, Europe, the Far East, and India, traversing the extensive oeuvre of traditional piano trio repertoire and introducing audiences to new music that they have commissioned and premiered.

In March 2019, the Horszowski Trio made its London debut in a sold-out concert presented by Wigmore Hall. In the same season, they also appeared at the 92nd Street Y in New York City; the Kimmel Center in Philadelphia; Schubert Club in Saint Paul, Minnesota; Spivey Hall in Atlanta; Bowdoin Music Festival in Maine; UCLA in Los Angeles; Dresden’s Moritzburg Festival (Germany); and venues in Boston, San Francisco, Canada, and Japan, among others. In addition, they released a recording of the complete piano trios by Robert Schumann on AVIE Records, receiving tremendous acclaim: “great care and affection” (BBC Radio); “intoxicating” (Gramophone); “exciting and deeply felt” (Strings); “fresh, supple and fantastic” (The Strad).

Amadi Azikiwe, violist, violinist, and conductor, has been heard in recital in major cities throughout the United States, such as New York, Boston, Cleveland, Chicago, San Francisco, Pittsburgh, Houston, Baltimore, and Washington, D.C., including an appearance at the U.S. Supreme Court. Mr. Azikiwe has also been a guest of the Chamber Music Society of Lincoln Center at the Alice Tully Hall in New York, and at the Kennedy Center in Washington. He has appeared in recital at the Piccolo Spoleto Festival in Charleston, the “Discovery” recital series in La Jolla, the International Viola Congress, and at the American Academy of Arts and Sciences. Since then, he has performed throughout Israel, Canada, South America, Central America, Switzerland, India, Japan, Nigeria, Hong Kong, and throughout the Caribbean.

Get To Know The Horszowski Tro​