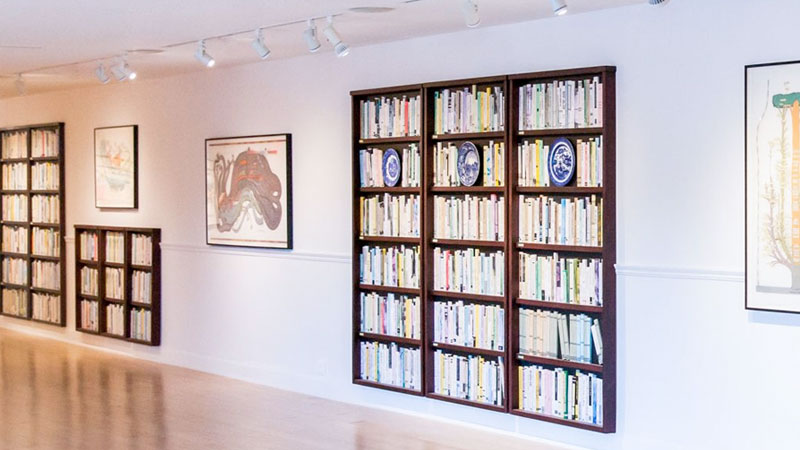 Ward Shelley’s What Keeps Mankind Alive featured a selected group of diagrammatic paintings that tease out narratives from history and culture. The paintings were presented within the context of The Last Library, an ongoing collaboration between Shelley and artist Douglas Paulson. The Last Library featured a room-sized installation of bookcases and 3,000 books that according to Shelley, “should have been written, but haven’t.”

The exhibition was on view from December 1, 2017 – March 2, 2018.  The works were presented courtesy of the artists and Pierogi Gallery, NYC.

Shelley makes paintings with information the way that historians make stories from facts. Previously on view at Pierogi Gallery, NYC, the exhibition began with the understanding that people depend on a collection of narratives to explain the world around them.

Shelley explained, “These narratives are stories that weave together a series of facts, or assertions, so they make sense. Narratives create what is true for the believer, which are more germane to the believer’s life than facts.”

Shelley considers his diagrammatic timelines as representations of these narratives. He continues, “Facts are like dots on a graph. The narrative is the curve that connects them, that gives isolated data points meaning, and gives meaning shape . . . As actors in the world, we need a worldview, and a worldview requires construction. Narratives are what we construct – they are the basic building blocks for organizing our outlook and interpreting the world.”

Similarly, The Last Library collects parts to make a whole. In this case, the parts are in the form of book titles, which are highly condensed signifiers of the narratives contained (or at least expected to be) within the book. But there are no actual books, only titles, including The Better Side of Valerie, and You and Your Confirmation Bias, and Fake Fakes.

Shelley’s performance, installation, and timeline works have been shown widely in Europe and the US. He is the recipient of numerous prizes and residency fellowships including the Rome Prize and a Joan Mitchell Foundation Award, among others. His works are included in the permanent collections of the Museum of Modern Art (NY, NY), Whitney Museum of American Art (NY, NY), Thyssen-Bornemisza Art Contemporary (Vienna, Austria), and the Elizabeth A. Sackler Center for Feminist Art, Brooklyn Museum (Brooklyn, NY).

Shelley, alongside artist Alex Schweder, was also featured in the Performa 17 Biennial in New York City on November 10 – 19, 2017. Performa is an extraordinary and interactive public platform for showing the essential role of performance art in society. Collaborators since 2007, the pair practice what Schweder describes as “performance architecture,” or the exploration of how inhabiting a space affects us psychologically. As Schweder + Shelley, the pair builds complex structures, and move in to occupy the space for a set duration of time.

Their work in Performa 17, The Newcomers, was an outdoor durational architectural performance that spans both time and distance with responsive and ambulatory forms of habitation. It was commissioned by Performa for the “Circulations” Architecture and Performance Program.

Additionally, Shelley’s work was also on view at The Aldrich Contemporary Art Museum in Ridgefield, CT from November 2017 through April 2018. The Aldrich Contemporary Art Museum’s Alex Schweder and Ward Shelley: Your Turn was an architectural environment for two that shapes the occupants’ behavior. In a series of performances Schweder and Shelley physically occupied the structure for extended periods during which they negotiated the sharing of nine basic amenities while engaging the public with their daily routines and conversations. The artists were in residence November 30 – Dec 2 and Dec 8 – 10. 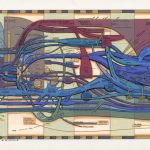 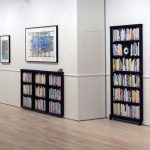 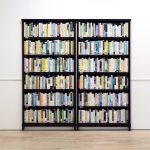 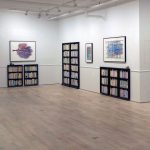