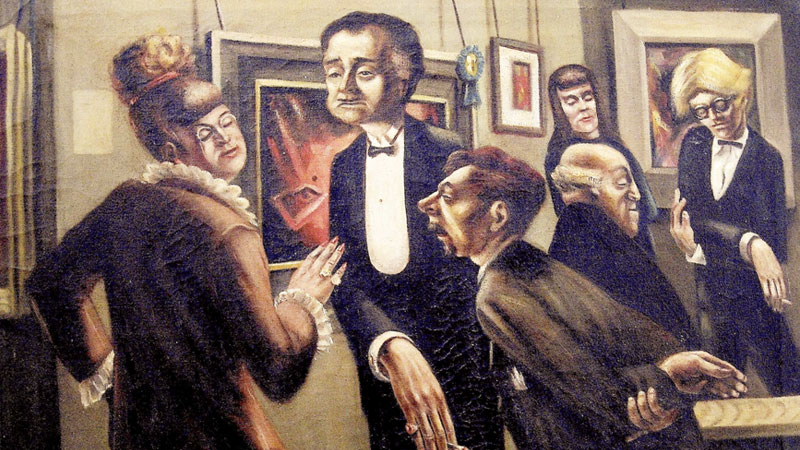 The collection reflected Fisher’s ability to blur the lines between design, illustration and art, and reveals the long-lasting impact that Fisher has made in his lifetime.  The Westport Arts Center is grateful to all the supporting private and public institutions that made loans for the exhibition, including Cavalier Galleries, the New Britain Museum of American Art, and Michael Rosenfeld Gallery (NYC).

Curated by Helen Klisser During, the Westport Arts Center’s Artistic Director Emeritus, this unique retrospective included 48 paintings, drawings, and illustrations from Fisher’s prolific 70-year career. The exhibition ranged from his earliest drawings to his latest works.

Fisher, now age 92, comes from a family of four generations that shared an artistic flair, but is the first of his family to have become a professional “picture maker.”  He attributes his love for storytelling to his mother, who read him encyclopedia excerpts in elementary school.  His parents were supportive of his art and encouraged him to pursue painting and design; they gave him a “studio” in the front hall closet of their Bronx apartment after he dipped his father’s paintbrush in India ink and destroyed his father’s watercolor painting.

Although Fisher has been highly recognized for his artistic accomplishments, it is only recently that he truly considered himself an artist. “I always viewed myself as a craftsman working on commissions, putting my own stamp on them,” he stated.  He cites that painting is his passion, and has at times spent sixteen hours a day on his craft.

Fisher acknowledges that his wife of 62 years, Margery, has been his greatest influence, and believes several life experiences had significant impact on his success.  “One factor was being born to the right parents.  Second was coming out of the war alive.  Meeting my wife and getting married is number three, and fourth is having the best kids (and their spouses) and grandchildren in the world,” he said.

Born in New York City in 1924, Fisher is a World War II veteran (1942-1946) who served at home, North Africa and Hawaii with the 30th Topographic Engineers as a photogrammetrist – one who makes topographical maps from aerial photographs. During two years of deployments overseas under orders of the United States Joint Chiefs of Staff, and in cooperation with the British Survey Directorate and the Joint Intelligence Command Pacific Ocean Area, Fisher, a non-commissioned officer, was assigned to the 30th Engineers Battalion Operations. Here he participated in secret missions creating vital ground, dead reckoning, sea and navigational maps.

His prewar art studies (1932-1942) began at the Heckscher Foundation (NYC), and continued with Moses Soyer (New Art School, NYC); Reginal Marsh (Art Students League, NYC); Olindo Ricci and Serge Chermayeff (Brooklyn College, NYC).  He served as the Dean of the Whitney School of Art, and was at the time the youngest academic officer in America.

Fisher has illustrated some 250 books for young readers (1955-2007), authoring 88 of these, a number of which appear in a dozen or more languages.  He has designed 10 United States postage stamps and has executed paintings for the Norwalk (CT) Transit District building.  He has also served as the President of the Westport Public Library.

His numerous honors include a Pulitzer painting award, the Premio Grafico Fiera Internazionale di Bologna, the Medallion of the University of Southern Mississippi, the Christopher Media for Illustration, a National Jewish Book Award, the Regina Medal of the Catholic Library Association, the University of Minnesota’s Kerlan Award, the American Library Association’s Arbuthnot citation, and the New England Booksellers Association Children’s Literature Award.

His art is in collections of the Library of Congress, the Smithsonian Institution National Museum of Postal History, the Butler Art Institute, the New Britain Museum of American Art, the Museum of American Illustration, the Housatonic Museum of Art, Mt. Holyoke and Union Colleges, the Universities of Connecticut, Brown, Oregon, Minnesota, Oklahoma, Appalachia State, and Southern Mississippi, New York and Westport Public Libraries, among others.

Fisher’s art has been seen at the Chicago Art Institute, the Brandywine River Museum, the New Britain Museum of American Art, and other venues nationwide.  His work, Coney Island, 1949 is currently on view as part of the Coney Island: Visions of an American Dreamland, 1861 – 2008 exhibition at the Wadsworth Atheneum Museum of Art through May 31, 2015.

He was a delegate to the White House Conference on Library and Information Services during the Carter Administration; is Dean Emeritus of Paier College of Art (CT); a recipient of an Honorary Degree from that institution; and a member of the Sanford Low Illustration Committee of the New Britian Museum of American Art.

3.    Leonard Everett Fisher in his studio. Photo by Helen Klisser During 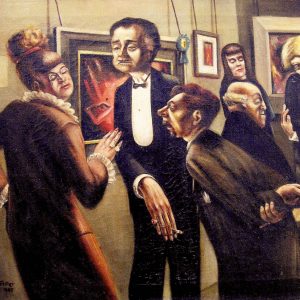 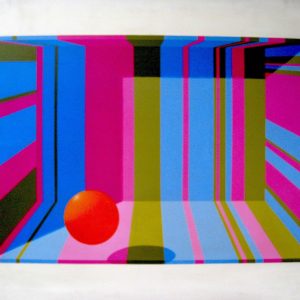 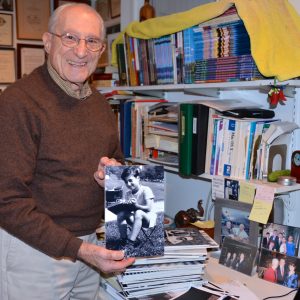