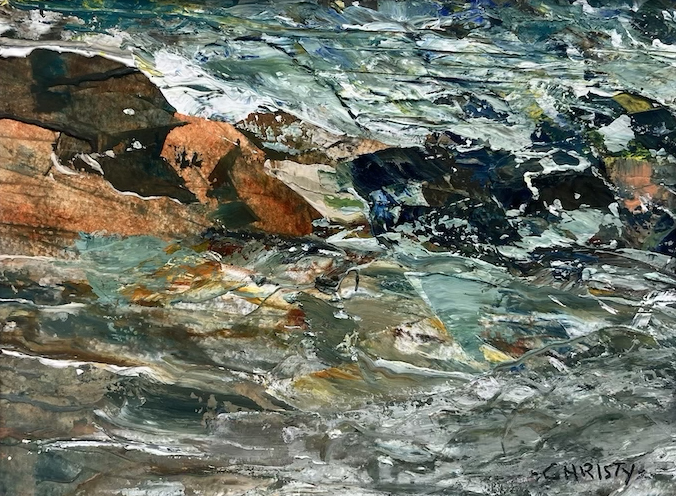 MoCA Westport announces the premiere showing of the From the Pen to the Knife exhibition, featuring a unique collection of watercolor paintings by the ground-breaking artist Marian Christy. Christy is the pioneer of the Knifed Watercolors® style, a process that shatters the traditional method of creating watercolors by using only palette knives and puddles of paint.

From the Pen to the Knife will be on view at MoCA Westport from October 15 – November 27, 2022. An opening reception for the exhibition will be held on Saturday, October 15, 2022 from 5 – 7 p.m. at the Museum. The reception is free and open to the public. Docent-led tours are available on Thursdays; advance registration requested here.

Christy was an award-winning journalist for the first chapter of her life. She was a writer for The Boston Globe at a time when women had limited journalistic opportunities. Her writing was nominated for two Pulitzer Prizes and was considered innovative in the areas of fashion and celebrity reporting.

She considers her time as an artist as a second chapter of her life, a time where she pivoted from “the pen to the knife.” She explains of her Knifed Watercolors process, “My focus is to make this unique signature a 21st century contemporary style, elevating watercolors to new depths and dimensions. I want to pull the viewer into the image, arouse curiosity but, most of all, to make an emotional connection silently, one-on-one.”

“I paint most scenes of our outer life. The scenes are metaphors for our inner selves. The landscapes are full of these messages. To give the viewer a broad print, I detail the feelings with a title that is a kind of code about emotions that connect us all,” Christy added.

Christy, now age 90, did not receive formal training, and has been working for the last fifteen years in her basement, sitting at an ordinary easel, held firm by used bricks to sustain her forceful palette knife strokes. Christy does not work on site nor use the plein air process of “direct observation and painting outdoors with the artist’s subject in full view.” Images and figuration emerge from her imagination, with no direct reference materials.

Christy’s passion for painting developed in her childhood, but was discouraged because she was female. The sheer number of works, as well as the sensational palette and varied surfaces and textures, relay not only Christy’s joy in artmaking, but illustrate a literal and metaphorical creative explosion. Granting oneself permission to express “our inner selves” as Christy describes, is essential to every work and the artist’s unique history.

“Marian Christy is someone who has always pushed boundaries – as a woman, as a journalist and as an artist. She was not deterred by what others expected of her and she forged her own path,” stated Ruth Mannes, Co-Curator and Executive Director of MoCA Westport.

“We are honored to have the opportunity to share Christy’s watercolors with the public. These specific paintings have never before been viewed together as a collection, and we are thrilled to give her work the exposure it deserves,” added Mannes.

The exhibition is generously sponsored by The Hofstetter Baron Group of Wells Fargo Advisors.

Twice nominated for the Pulitzer Prize, Marian Christy has won thirty prestigious national and international journalism awards for The Boston Globe (1965-1991). During her illustrious 26-year newspaper career, syndicators distributed her work world-wide when she became the first and only three-time winner of the highly distinguished JCPenney-University of Missouri Journalism Award (1966-1968-1970). Additional distinctions include:

All images courtesy of the artist.