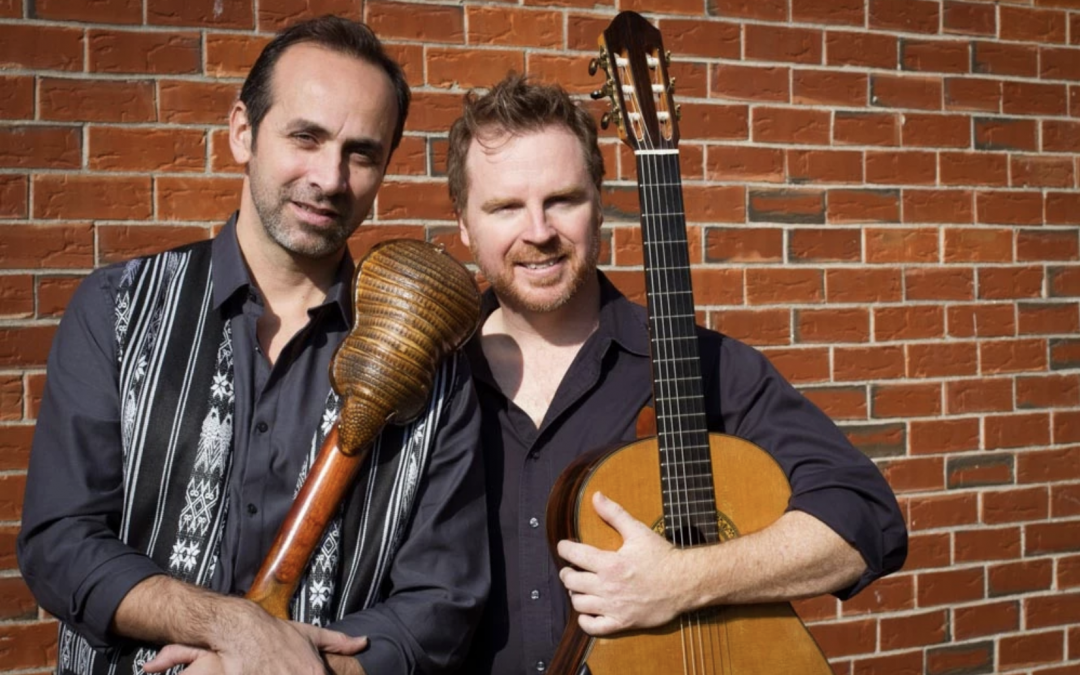 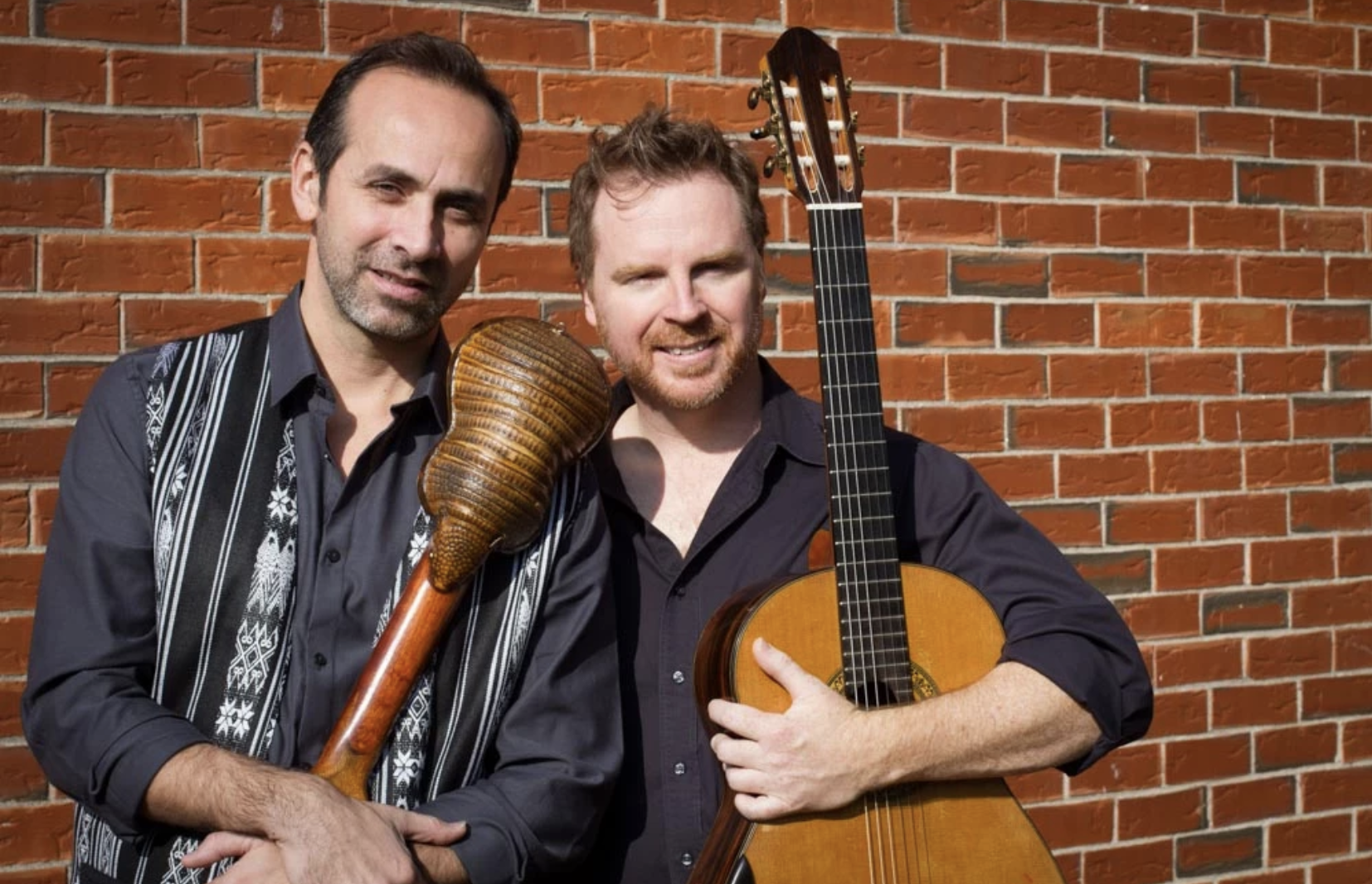 Join us for an engaging performance of spirited and passionate world music!

Join us as we kick off our 2022 Music at MoCA concert series! Come early to get a sneak peek of our Punk is Coming exhibition and to order dinner! Delicious food and drinks will be available for purchase including Pisco Punch and a variety of tacos prepared by Shaken & Stirred; see the menu here.

Blending South American folk worlds together, the Alturas Duo has performed internationally to great acclaim. The Alturas Duo with flutist Gonzalo Cortés will give a performance and interactive presentation of South American music that explains how African, European, and Native cultures mixed to create Latin American folkloric music as known today. The group will premiere the female Latin American composer Karina Contreras Galindo’s work in celebration of Women’s History Month.

The Duo will also lead a FREE interactive educational workshop for students on March 25 at 5pm. Through the workshop, students will learn to incorporate other art mediums to deepen their understanding and create work inspired by South American folk art. Register Here.

Their workshop will include short musical examples from their repertoire, and an introduction to the various instruments they play including the viola, guitar, charangos and Venezuelan cuatro. Fortunately, when their good friend Gonzalo Cortes joins, those instruments expand to include the quena (Andean flute) zampona (pan flutes) and classical flute! The workshop will explain how African, European and Native cultures came together to create South American folk music as we know it today, and how natural elements affect everything from the materials used to make instruments (armadillos, bamboo, and goat toenails to name a few!) to how musicians use their surroundings to influence their songwriting and rhythms.

Get To Know The Alturas Duo

Praised by The Washington Post as playing with “marvelous virtuosity,” Alturas Duo is recognized as one of the most engaging ensembles performing chamber music today. Bringing together the worlds of South American folk, Western classical, and contemporary music, guitarist Scott Hill and violist and charango player Carlos Boltes have performed throughout the United States, Canada, Europe and Central and South America to great acclaim.  As Christopher Zimmerman, Music Director of The Fairfax Symphony, notes: Scott Hill and Carlos Boltes as “the Alturas Duo are the quintessential 21st century artists.”

With its unusual combination of viola, charango, and guitar; Alturas Duo creates spirited and passionate programs that move with ease between the Baroque of Bach, South American melodies and rhythms learned through the oral tradition, and newly commissioned repertoire. Their performances oscillate from the beautiful and serene to strong and pulsating, taking audiences on a journey to new musical heights and to earn Alturas Duo numerous awards from First Prize at the New England International Chamber Music Competition, a CMA/ASCAP Award for Adventurous Programming, and the 2020 World Folk Vision popular vote award and jury selection for best Latin Music Band.

As their instrumentation is quite unique, Alturas Duo works regularly with composers to broaden the repertoire and expand possibilities.This has led to 50+ additions to the repertoire featuring the guitar, viola, and/or charango in chamber music settings as well as works for the choral and orchestral worlds. Collaborations with composers include Ronald Pearl, Thomas Schuttenhelm, David Macbride, Dan Román, José Lezcano, Javier Farías, and Raimundo Penaforte to name a few. Some of the most significant works Alturas Duo has commissioned and premiered include Farías’ Oceana (for guitar, viola, charango and mixed chorus) and El Vuelo de tu Alma (for guitar and charango, alt. with string orchestra), David Macbride’s No mas muertes, and Ronald Pearl’s The Places We Left Behind (for guitar and viola).

​Their work with such performers and composers has had the Alturas Duo performing in venues and for presenters such as Carnegie Hall, Merkin Hall, Symphony Space, the Smithsonian Institute, the Historic Asolo Theater, Le Petit Trianon (CA), La Maison de Mai (Paris), the 34th International Viola Congress, La Guitarra California, and Music Mountain.

Alturas has been recorded for release on the Brioso, Con Brio, and Ravello Records (PARMA) labels in addition to its collaboration with Joseph Holt and the Choral Arts Society of Washington for an award winning release of a collection of works by the celebrated Argentinian composer Ariel Ramírez, including Misa Criolla, for Naxos.

The Alturas Duo was founded in 2001 while Carlos Boltes and Scott Hill were pursuing their graduate studies at the Hartt School of Music. In addition to its performing and commissioning new music, Alturas Duo embraces its role as educators and music advocates with students in elementary school to university level and beyond. At various points during its history, Alturas Duo has had the pleasure to serve as a “Goodwill Ambassador” for the Chilean-American Foundation and as Artist-in-Residence for Intempo in Stamford (CT), an organization that promotes music education through multiculturalism, with the goal of incorporating native South American instruments into different styles of music. The name Alturas, Spanish for “heights,” is derived from the poem “Alturas de Macchu Picchu” by the Chilean poet Pablo Neruda.