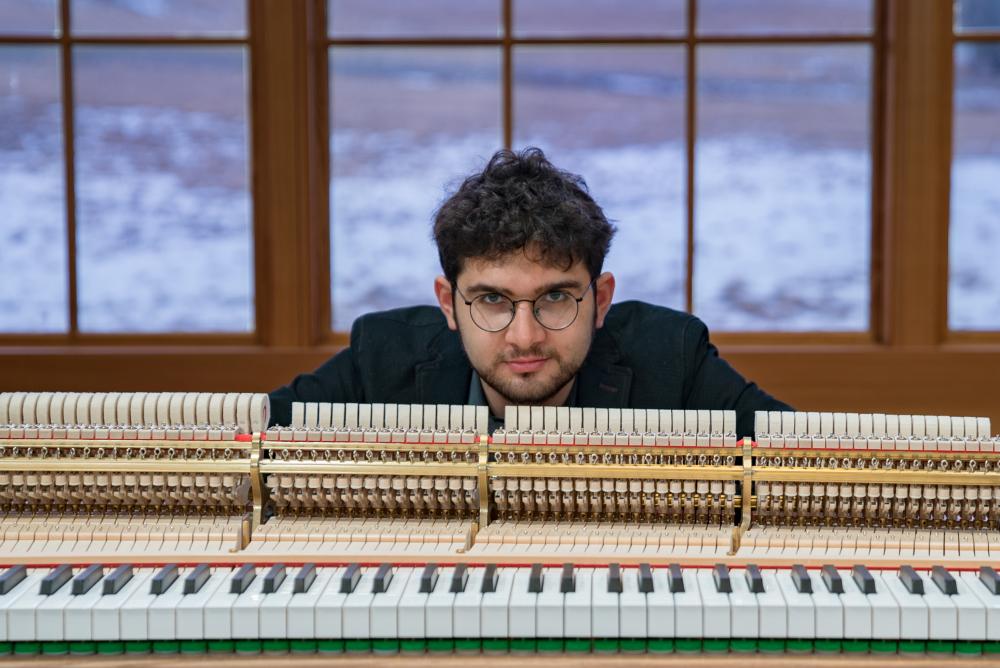 Join us for a performance by an esteemed pianist at MoCA!

Join us for a stellar concert in the context of our Women Pulling at the Threads of Social Discourse exhibition. Arrive early to experience the exhibition with complimentary access and to purchase delicious food and drinks; check out the menu here. Gallery seating will be provided.
The program includes:
César Franck (1822-1890): The Complete Piano Music, In honor of his Bicentennial
Prelude, Aria et Final
Prelude, Chorale et Fugue
Prelude, Fugue et Variation
Sonata for Violin and Piano (arranged Alfred Cortot

The eloquent pianist Roman Rabinovich has been highly lauded by The New York Times, BBC Music Magazine, the San Francisco Classical Voice and others. He has performed throughout Europe and the United States in venues such as Wigmore Hall in London, Carnegie Hall and Lincoln Centre in New York, the Great Hall of Moscow Conservatory, the Cité de la Musique in Paris, and the Terrace Theater of Kennedy Center in Washington DC. Rabinovich has participated in festivals including Marlboro, Lucerne, Davos, Prague Spring, Klavier-Festival Ruhr, and Mecklenburg-Vorpommern. An avid chamber musician, he is also a regular guest at ChamberFest Cleveland.

Rabinovich has earned critical praise for his explorations of the piano music of Haydn. At the 2018 Bath Festival, he presented a 10-recital 42-sonata series, earning praise in The Sunday Times. Prior to that, in 2016 as artist in Residence at the Lammermuir Festival in Scotland, he performed 25 Haydn sonatas in 5 days, and over two seasons, in 2016 and 2017, he performed all Haydn’s sonatas in Tel Aviv.

In May 2020 Rabinovich will perform two recitals comprising of Haydn and contemporary works at the 92nd Y in New York and three programs dedicated to Haydn at the Wigmore Hall.

The last two seasons saw Rabinovich’s critically acclaimed concerto debut with the Royal Scottish National Orchestra and Sir Roger Norrington, as well as with the Orquestra Sinfónica do Porto Casa da Música, the NFM Leopoldinum and Szczecin Philharmonic in Europe, and the Seattle Symphony, the Sarasota Orchestra, Des Moines Symphony, the Sinfonia Boca Raton and James Judd in the US.

Solo recitals appearances include Lincoln Center’s Alice Tully and Walter Reade Theatre, the Houston Society for the Performing Arts, the Washington Performing Arts Society, Vancouver Recital Society, Chopin Society in St Paul, MN, the Philip Lorenz Piano Series in Fresno, the Janáček May International Music Festival.and the Royal Welsh College of Music & Drama in Cardiff. As a chamber musician Rabinovich appeared with violinist Liza Ferschtman in, among others, the Concertgebouw Amsterdam, the Baden-Baden Festspielhaus and the BeethovenHaus Bonn.

Roman Rabinovich made his Israel Philharmonic debut under the baton of Zubin Mehta at age 10. He was a top prizewinner at the 12th Arthur Rubinstein International Piano Master Competition in 2008, while in 2015, he was selected by Sir András Schiff as one of three pianists for the inaugural “Building Bridges” series, created to highlight young pianists of unusual promise. Born in Tashkent, Rabinovich immigrated to Israel with his family in 1994, beginning his studies there with Irena Vishnevitsky and Arie Vardi; he went on to graduate from the Curtis Institute of Music as a student of Seymour Lipkin, and earned his Master’s Degree at the Juilliard School where he studied with Robert McDonald.

Get To Know Roman Rabinovich