Where the Lights in My Heart Go

This Fall, we bring together two of celebrated artist Yayoi Kusama’s works that offer two distinct persepectives on the ‘Infinite.’ One more internal, one more external, they both demonstrate how we reflect in the universe around us.

Narcissus Garden, originated in 1966,  is an expansive field of mirrored spheres, displayed en masse, and designed by Kusama herself to offer a unique pattern and experience here at MoCA Westport.

Where the Lights in My Heart Go, conceptually originated in 1965 and this piece in 2016, is a 10×10 mirrored room that while it appears to merge with its surrounding on the outside, creates a fathomless space punctuated by dots of daylight on the inside. 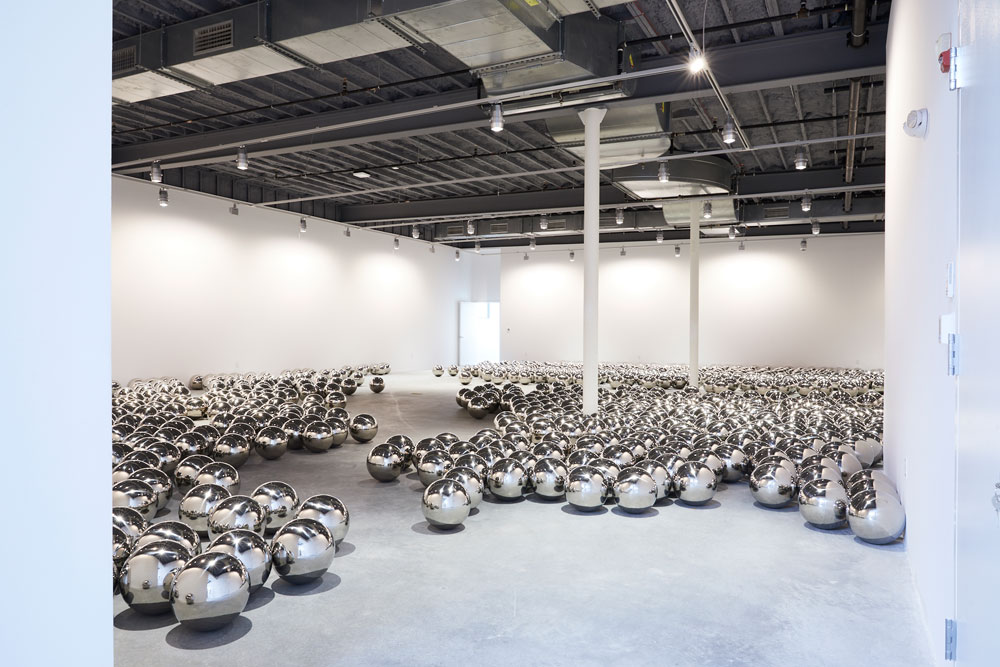 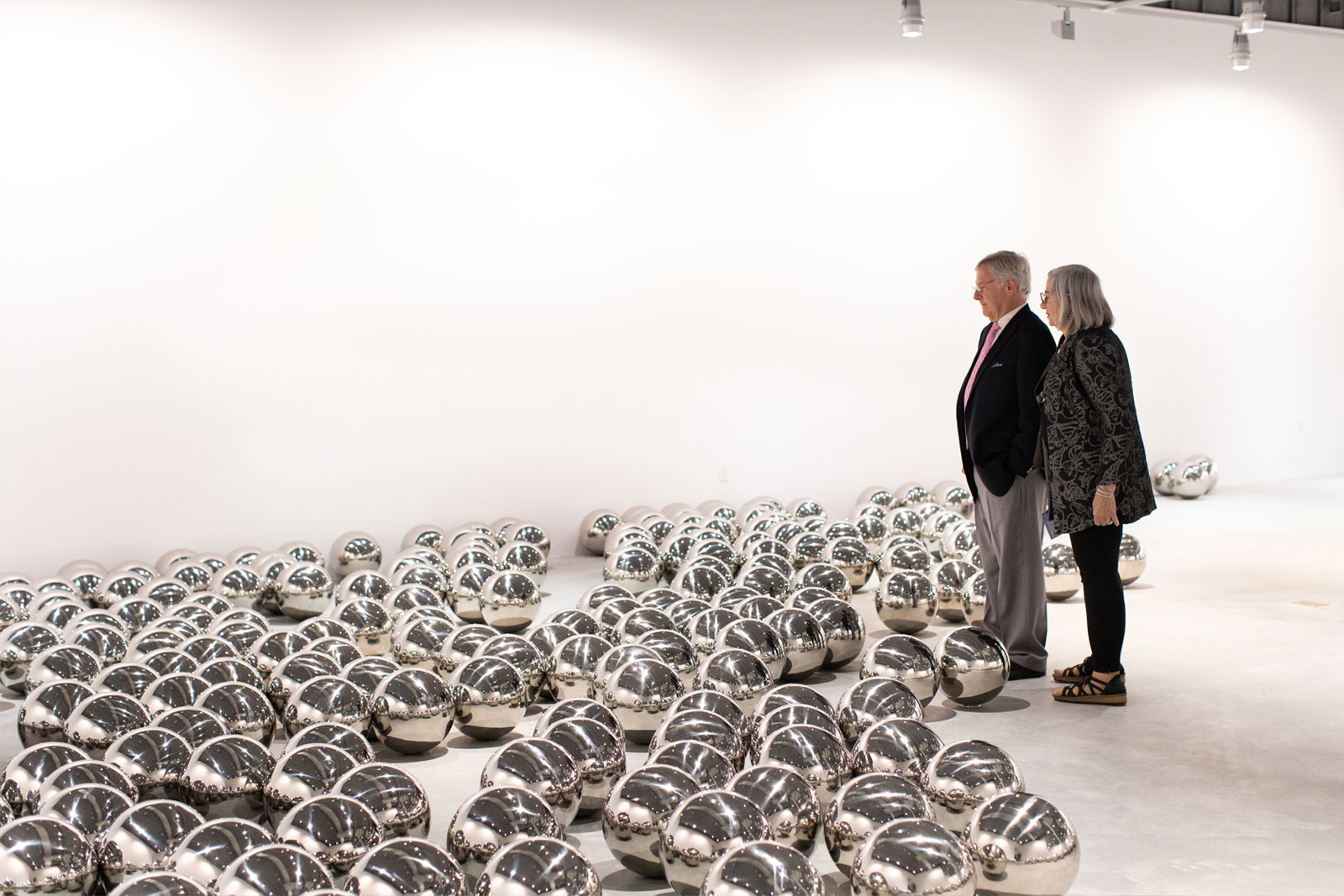 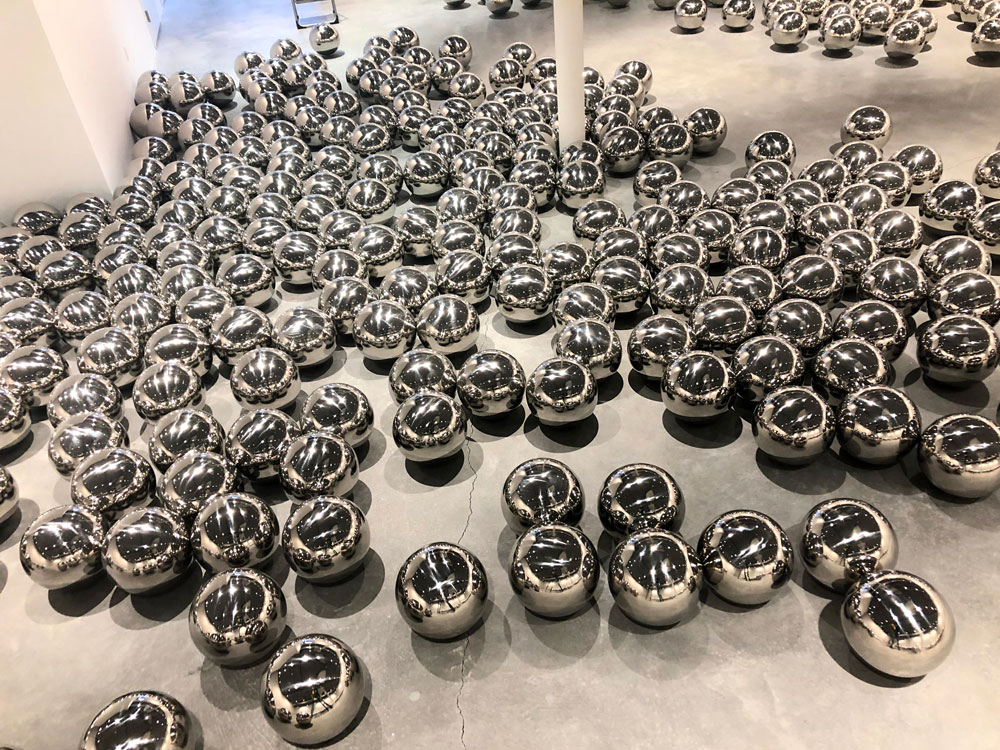 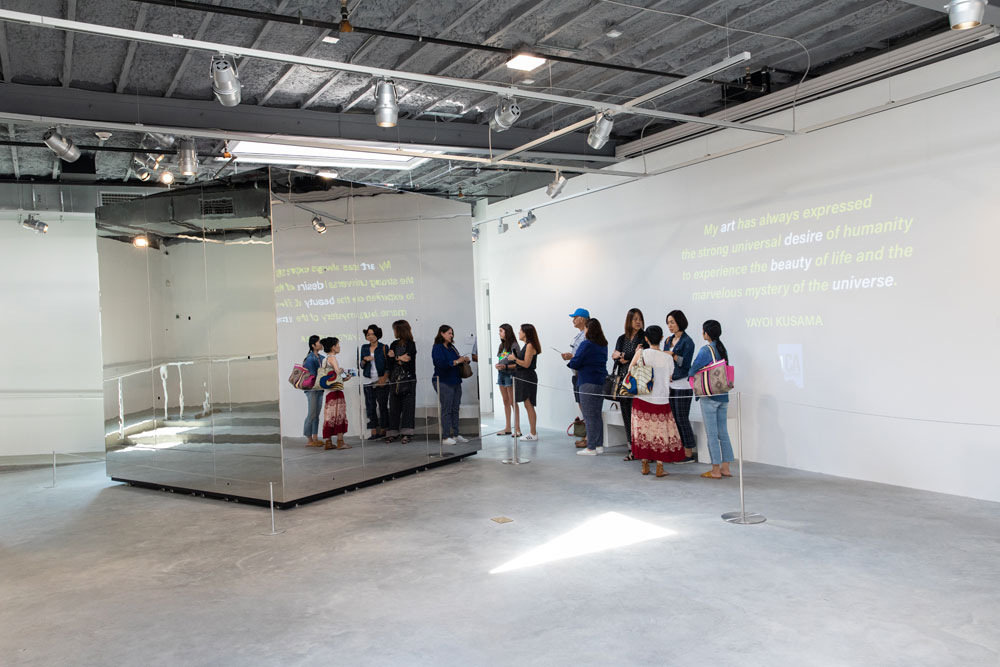 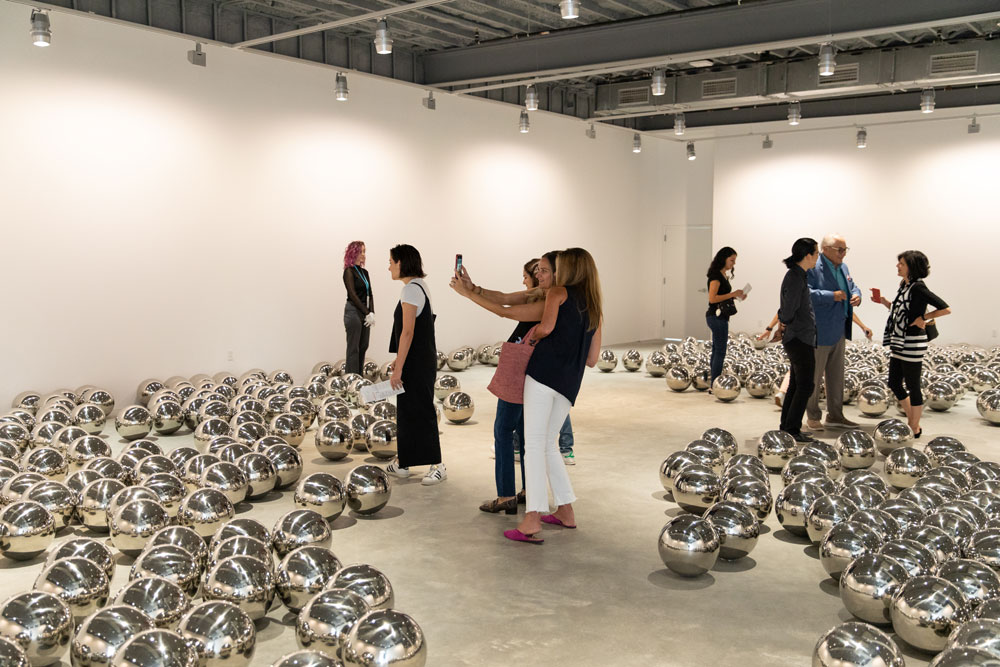 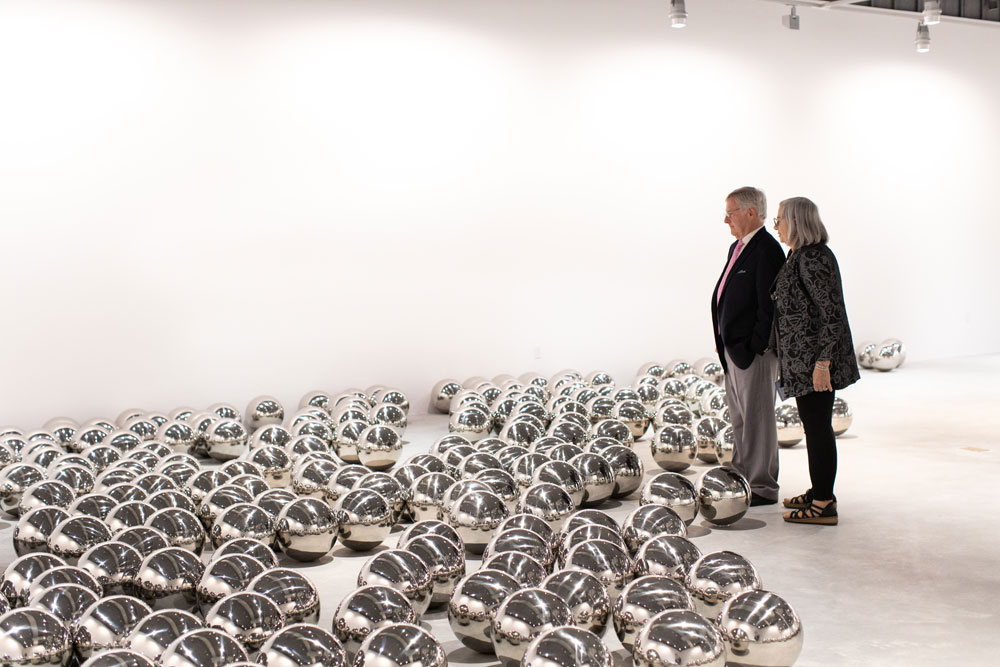 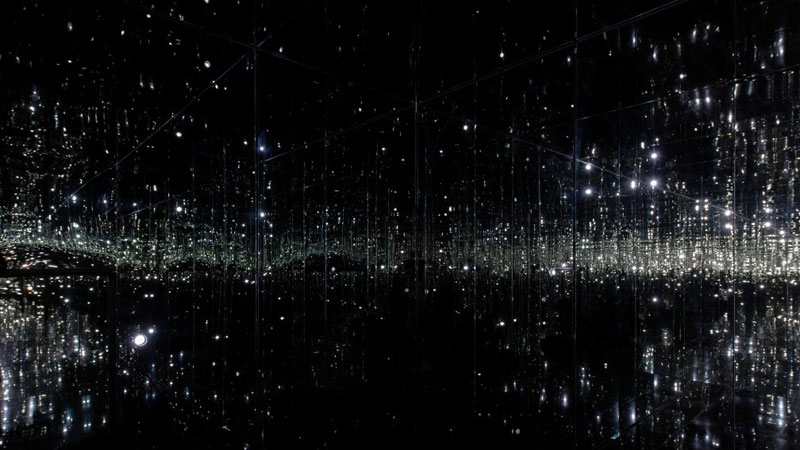 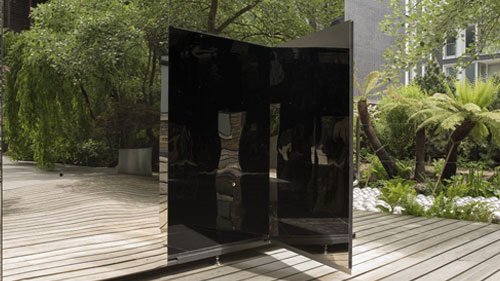 Throughout her career, Yayoi Kusama has developed a practice, which, though it shares affiliations with movements such as Surrealism, Minimalism and Pop Art, resists any singular classification. Born in Matsumoto City, Japan, in 1929, she studied painting in Kyoto before moving to New York in the late 1950s, and became well known in the avant-garde world for her provocative happenings and exhibitions.

Since then Kusama’s extraordinary artistic endeavours have spanned painting, drawing, collage, sculpture, performance, film, printmaking, installation and environmental art as well as literature, fashion and product design. In 2016, Kusama received the Order of Culture, one of the highest honours bestowed by the Imperial Family in Japan. Kusama is the first woman to be honoured with the prestigious medal for drawings and sculptures.

Kusama lives and works in Tokyo, where the Yayoi Kusama Museum opened in October 2017. Over the past decade there have been museum exhibitions of Kusama’s work enjoyed by millions of visitors in Argentina, Australia, Brazil, Canada, Chile, China, Denmark, England, Finland, France, Indonesia, Japan, Mexico, Norway, Russia, South Korea, Singapore, Spain, Sweden, and the United States.

Where The Lights in my Heart Go

Where the Lights in My Heart Go is a work of two distinct characters. While its mirrored exterior both reflects and appears to merge with its surroundings, punctured with small holes it becomes, on the inside, a fathomless space punctuated by dots of daylight.

Where the Lights in My Heart Go draws parallels with the ritualistic aspect and formality of Japanese culture. To enter, visitors must bow their heads, humble themselves in preparation for what they are about to experience. Magically, as one’s eyes adjust slowly to the play of light across its perforated walls, an ever-changing constellation reveals itself. Kusama has referred to the effect the work produces as a ‘subtle planetarium’ – a space in which to ponder the mysteries of the physical and metaphysical universe.

The room is a space of playful substitution: night for day, inside for out. Crossing its threshold denotes different kinds of transitions, as well, from the space of the body to that of the unbounded universe, the microscopic to the astronomical. At its core is the individual dot – a single particle among billions – with which Kusama has self-identified.

Artists who transcend the art world to become as famous and revered as Kusama tend to do so through biographical detail or iconic motifs. Kusama’s life and career are abundant with both. But her enduring appeal – what makes each Kusama exhibition revelatory – is the unique nature of any encounter with her art. Different for each viewer, Where the Lights in My Heart Go also changes with each fresh experience of it. It is immeasurable yet intimate. Kusama’s art may possess a kind of universal language, but it speaks to us one by one.

Yayoi Kusama’s installation Narcissus Garden originated in 1966, when the artist first participated, albeit unofficially, in the Venice Biennale. This expansive and immersive work comprises mirrored spheres displayed en masse to create a dynamic reflective field. In Venice, Kusama installed the spheres on a lawn in front of the Italian Pavilion. Signs placed among them were inscribed with the words ‘Narcissus Garden, Kusama’ and ‘Your Narcissism for Sale’. Kusama, dressed in a kimono, remained with the installation, offering individual spheres for sale (at $2, or 1,200 lira a piece). This succès de scandale was both revolutionary – a comment on the promotion of the artist through the media and a critique of the mechanization and commodification of the art market – and deeply connected to history, evoking the Greek myth of Narcissus, who fell in love with his own reflection (and paid the price for doing so).

Regarded as a pivotal in Kusama’s career, Narcissus Garden anticipates many of the radical performances that would become a focus of her time in New York during the late 1960s, while encapsulating key aspects of Kusama’s wider practice – allusions to microscopic and macroscopic worlds, a preoccupation with the infinite and sublime – that remain compelling in her art to this day. It is one of the first works by the artist to explore the optical and psychological potential of the mirrored surface as a means of transcending the limits of the physical world and creating a participatory experience in which the viewer is cast as the subject of the work. Connecting profoundly with global audiences, iterations of Narcissus Garden, each with their own distinct character, have subsequently been presented, both indoors and outdoors, on land and water, at venues around the world, including Central Park, New York City, as part of the 2004 Whitney Biennial, The Glass House, New Canaan, Connecticut in 2016, and, most recently, at Fort Tilden, New York, for Rockaway! 2018 presented by MoMA PS1 .

Special thanks to Lauren and Derek Goodman, who have generously loaned Where the Lights in My Heart Go and Narcissus Garden from their collection.
Special thanks for our partnership support from 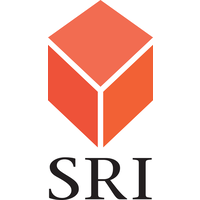